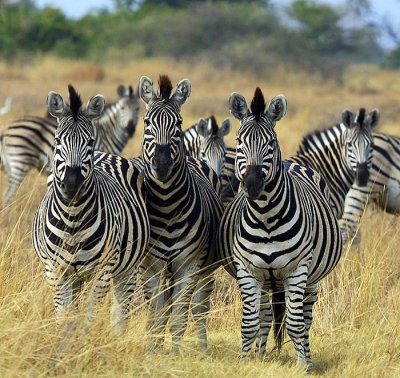 Considering the tremendous number of animals that have entered the list of species that are at risk of becoming extinct, it is no surprise fans of animals ask ''Are zebras endangered?''

The very positive answer here is that, as a whole, zebras are not endangered. Since the natural habitat for zebras has mainly been preserved and they are not universally a main target of poaching, these creatures have been able to maintain a sizable population. That said, there are two specific species of zebra that might be endangered.

Plains zebras have a solid population and seem to be surviving and thriving. While most are familiar with the plains zebra, there are other species in the zebra family. Two of them might be looking at a very bleak future. The two species of zebra that are currently endangered are the Grevy's zebra and the mountain zebra.

The Grévy's zebra is actually one of the largest of the zebras. In many ways, this is a very mule-oriented zebra as it has a long and narrow head. The Grevy's zebra lives in the grassy areas of Ethiopia and the northern regions of Kenya. This is an extremely rare species of zebra and one that is surely endangered.

The mountain zebra lives in South Africa, Angola, and Namibia. The numbers of these zebras has dwindled considerably. While poaching zebras might be less likely in other parts of Africa, in the regions where this zebra lives, there has been a lot of guerrilla warfare, which has contributed to the slaughter of the animals for meat.

Other Causes of Endangerment

In addition to the mountain zebra being hunted for food, both it and the Grevy's zebra are endangered due to human encroachment. The expansion of human agriculture has also harmed the ability for these zebras to sustain themselves, leading to a major decline in their population.